More precision for your mouse

Note: This page is primarily intended for users of good old ball mice. If your mouse is one of those new-fashioned optical one you might check Digital Inspiration first.

If you have ever tried to draw on a per-pixel base using your mouse you may nearly gotten mad: Some dots seem to be nearly unreachable. 3D game enthusiasts using the mouse are also sensible to this problem.

In the beginning, the movement of the mouse ball was transmitted onto a metal coil, sitting on a steel axis with the sliced disc sitting on it.

In the meantime you get 10 mice for the same price, but the quality dropped according to the price: The components described above are replaced by a simple plastic part stagging around in a plastic holder, having difficulties to follow the ball´s movement. If you pay more for your mouse you´ll get a better look of it, but the interior is often the same.
Using some flexible insulating tube we can turn the crap into a precision instrument.

Most mice are easily opened after removing two screws in the bottom (these may also sit under a label). 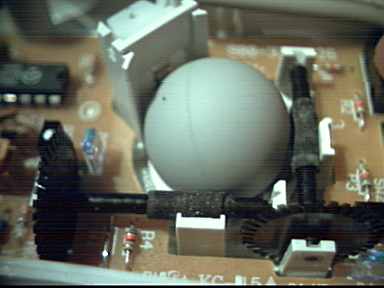 Using some, but not too much force one can press one of the two axis holders until one can lift oft one end of the axis (in most cases it is best to start with the end at the sliced disc). Do the same with the second one.

Pull some part of the tube onto the axis so that it sits at the place where the ball contacts the axis. Be careful not to break anything.

After reassembling the mouse you´re done.

Of course it is still required to clean the mouse from time to time. If you own a PS/2 mice you can also invoke the mouse driver conrol panel or use the tool PS/2_Rate which allows increasing the PS/2 mouse position update rate.

Now the mouse behaviour should be completely new...