Many motherboards and soundcards (e.g. Aureon Fun) with 2, 4, or 5.1-Output are based on CMI8738 series circuits. These offer not only line-, CD- and microphone inputs, but also an auxiliary and a PC speaker input as well. Especially the last one often remains unused on soundcards or is hardwired to the chipset´s PC speaker output on mainboards. This can be changed:

Other integrated circuits often have a similar pinout, refer to their datasheets for details.

Some of those circuits also offer SPDIF inputs:

How to add an input

The following part describes how to add or reuse the PC Speaker mono input. However, adding aux inputs works pretty much the same way. 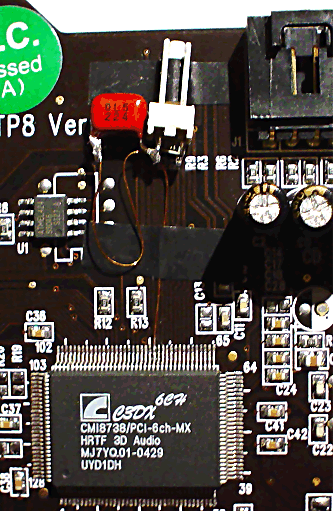 First, search the input pin to be modified. This can be done easily by tracking the microphone, aux or CD input lines next to it on the PBC. Next, check if the pin is free: If it was connected to audio reference level by the manufacturer, you have to remove this connecton by cutting the corresponding line on the PCB or desoldering components (or the input pin). This also has to be done if the speaker input pin was already hardwired to the chipsets PC speaker output pin.

Now comes the most critical part: Solderinig the copper wire to the circuits input pin. Take care not to cause a conductive bridge to neighboured pins. I´ve obtained good results by holding the already heated and tinned wired to the pin since this approach avoids moving the wire while the tin melts. If you´re lucky, you can use an already existing line leading away from the circuit, which is way easier.

In order to protect the fresh built connection, fix the wire on the PCB using glue or tape. Then, we have several possibilities for using the remaining end of the wire:

A capacitor for separating the circuit from attached devices is always required since the reference potential of the circuit is not equal to GND / 0 Volts !

Due to the fine pin spacing and plenty of different usage variants of the circuit, the modifications described are only recommended for experienced users! Although accidentaly caused tin bridges usually do not cause irreversible malfunction, removing them is still difficult - even then using a knife and desoldering wire.

Many manufacturers of soundcards or mainboards do not provide support for the unused inputs. Using the standard mixer program of the OS or the original drivers and tools from the circuit manufacturer (www.cmedia.com.tw) will solve this.