The internal wiring of the audio signals is often rather unclear while using the soundcard´s mixer. The following pictures provide a better overview of common soundcard designs.

This soundcard is typical for the audio routing of most ISA sound boards. The soundblaster ISA series up to the AWE 64 works nearly the same considering the analogue audio section.
Simple PCI sound cards use the same layout except in the wavetable and wave playback parts which are mixed together digitally before being fed into the analogue mixer circuit.

The special things of the PAS 16 not found on most other soundboards are a second digital/analogue converter (8 Bit), which behaves like a separate, SB compatible, soundcard residing on the soundcard. And the PAS 16 owns the only useful microphone input I have ever seen on any soundboard so far. The use of high quality components in the complete analogue section with much fewer compromises than on other boards make it the ideal card for digitizing sounds of all kind. 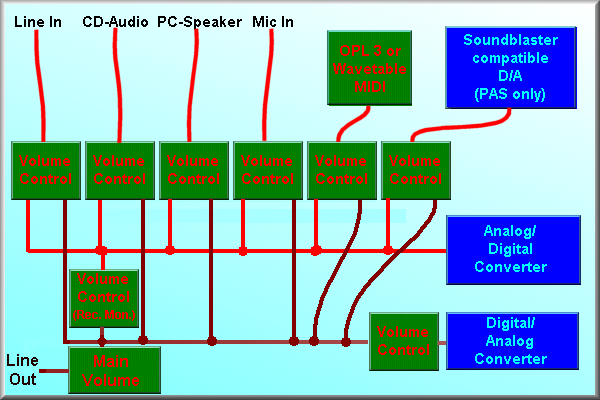 The SB Live is one of the new soundboards with mainly digital sound processing, real 4 speaker support and digital effect processor. The fact that all analogue inputs are mixed together before being digitized is due to making the soundcard design more flexible considering the amount of analogue inputs as well as minimizing the number of expensive analogue/digital converters needed.

Such cards are often described as 32 bit cards with 192 dB signal/noise ratio, but:
This is only true for the digital section of the soundcard since doubling the amounts of bits is quite easy to realize in the digital section. Depending on the algorithm used in the DSP, it is often even not practical to work with 16 bits due to mathematical inaccuracy as a result of the limited bit depth. The analogue/digital and digital/analogue converters are normally 16 bit ones (which should be enough in most cases since they provide the same dynamic range than on a CD and often an even better frequency behaviour). Converters with a resolution of 20 bits are still far to expensive for private use.

Each of the digital inputs (+ the premixed analogue input) can be assigned separate effect settings (hall, chorus, flanger, ... ) and be routed independently to the 4 speaker outputs (however, the right/left speaker assignment cannot be overridden). The effect processor does not treat the front and the rear output separately and only the front output is also realized in SPDIF as well.
Note: The digital mixer behaves at the user´s viewpoint in the same way as the analogue shown above. 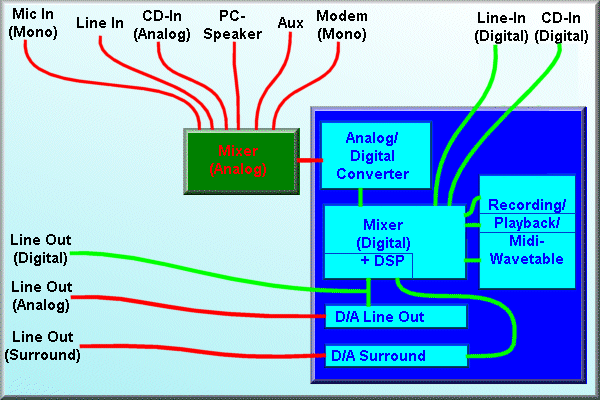